“Let fear be a counselor and not a jailer.” ~Tony Robbins

As someone who has struggled with anxiety my entire life, I can honestly say I never thought I’d be where I am today, doing some of the things that I’m doing. I’m from a small town in Tennessee where about 99% of the people I went to high school with have been married for at least ten years…and most haven’t ventured far beyond the borders of our small, safe town. There was a time several years ago when I was struggling with daily panic attacks, to the point where I could barely leave my backyard, let alone travel all the way to New York City. Yet, over the past year, I’ve been to NYC twice…Washington, DC…Virginia Beach…Philadelphia…Columbus, Ohio…Louisville, Kentucky…Atlanta, Georgia…and virtually all over the state of Tennessee. A girl who once upon a time could scarcely leave the borders of her neighborhood without feeling anxiety has ventured FAR beyond the borders of her comfort zone. But I didn’t get here by giving in to panic and anxiety and fear. I got here by fighting it, every single step of the way. By refusing to shrink down in the face of fear. And by, as Tony Robbins says, letting fear be my counselor and not my jailer. I still have a ways to go, certainly…but that doesn’t stop me from being proud about how far I’ve come.

I recall one day a few years ago when things were particularly bad with my panic attacks and my dad, who was there for me throughout the entire ordeal, didn’t know to do to help me. Since a father’s job is to protect his children, he wanted so badly to make the fear go away for me. But he couldn’t. He was powerless to help. So what he did was the only thing he knew to do…he turned it over to the Heavenly Father. We sat in the car one day at Barnes and Noble and he took my hands and prayed: “Dear God, we have asked you to take this panic away and it’s still here. So now we accept that maybe this is Mandy’s cross to bear, and if that is the case, please give her the strength to endure it and the courage to learn the lesson from it.”

After that prayer, every day after was a little bit better than the day before.

There’s a quote that says this:

“Anxiety and panic attacks happen to people with high intelligence, who are very creative, detail oriented & analytical. It is actually your strength.”

Ask yourself today: What is my biggest fear? Then tune into Oprah’s Lifeclass tonight at 8/7 CDT on OWN (where I’ll be blogging/tweeting live from!), as the great Tony Robbins talks with Oprah live from Radio City Music Hall in NYC about “Living Fearlessly.” I promise you, it WILL change your life. It has already changed mine.

Then remember: Go easy on yourself. It’s OKAY to be scared. Being scared means you’re about to do something really, really brave. 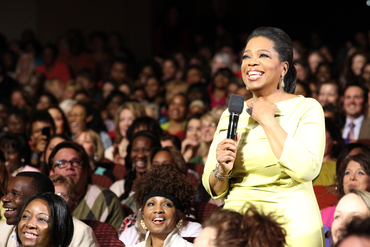