In perhaps the most tear-inducing movie scene of all time, found in the mother of all chick flicks, the very film that I myself saw at the theaters six times and own not one, but TWO copies of…Kate Winslet’s Rose famously makes a promise to Leonardo DiCaprio’s Jack that she’ll never let him go. She cried…we cried…the person in the next theater over watching Men in Black cried, completely enraptured by the sheer beauty and epic romance of Rose refusing to let go of her beloved. The music rises to a crescendo, and the magic of the moment transports you to another time and place, until you feel as if you’re floating on the next log over from Jack and Rose, watching this beautiful moment in cinematic history take place. Tears roll down your cheeks, your vision blurs and you start to gulp and hiccup from the intense emotion…waiting for the star-crossed couple to meet their demise together, giving Romeo and Juliet the boot as most popular, most tragic, most romantic couple ever to land on the silver screen.

Then…wait a minute. Something’s happening. She’s sitting up. She’s kissing him goodbye. She’s…could it be? Letting him go?!?!?

Though my lip quivers a bit just thinking about that scene, the symbolism of what happens in the film’s climactic finale moment is not lost on me. And while you may argue that she only lets him go “figuratively”…the fact is, Rose had to physically and even emotionally untie herself from Jack, not only to just move on with her life…but to SAVE her life. Had she opted to stay there, clinging to him with the same desperation that she clung to her life raft (and believe me, if Leonardo DiCaprio was holding my hand, I’d be pretty tempted to stay behind, come hell or high water, myself), that would have been the end of her story, too.

No, Rose didn’t get the Happy Ending she had hoped for, because life had other plans for her. And though they are fictional characters, I feel certain that plenty of people throughout history have found themselves in similar predicaments: “Do I cling to a sinking dream for dear life and risk certain disaster…or let go and move on to an uncertain future without the person I thought would be standing beside me for the rest of my life?

As we weather the choppy waters we call Life, it’s a decision we will face time and time and time again: Do we cling to a situation that’s taking us under out of fear of letting go of the familiar, or do we open our hand and let go of that friendship, that relationship, that job, that opportunity, or that grievance that we’ve been clinging to, realizing that to flail around uncertainly for a season is all a part of discovering our destiny?

Rose made the decision to let go. As painful as it might have been to release her lover in order to rescue herself, she was determined not to miss out on everything ahead of her by trying to raise the dead. And though she didn’t get her Happily Ever After with Jack, she did get it. In the closing scene of the movie, when we see the older version of Rose peacefully sleeping, the camera pans to countless photos from her colorful and well-lived life. We see that Rose went on to take risks and have adventures and live life to the very last drop, even without Jack there beside her. Knowing him made her a better person, introduced her to a side of herself she didn’t even know existed, helped her take her first unsteady, hesitant steps toward becoming the woman she was meant to be; but letting him go was the catalyst for actually realizing her destiny, and fulfilling her dreams, and living up to her true potential. The truth is: friends and lovers and opportunities will come into our lives and, in some cases, shake us to our very core along the way…however, not all are meant to stay.

THE SINGLE WOMAN SAYS: Some people pass through our lives for a season to teach us lessons that could never be learned if they stayed.

The trick to not getting mired in the past and missing out on the future lies solely in our ability to let go and move on, yet this seems to be the most difficult thing in the world for most people (including myself) to do. The ebb and flow…the stay or go…the hold on and the let go…what does letting go and moving on actually look like? How do you know when it’s time to let go and move on? More importantly, what exactly are you supposed to let go of and move on from? Hands down, the number one request for advice I get involves the process of letting go and moving on. It seems that although we know in our hearts it’s time to move on from what was, we need someone to be the voice of reason, reminding us WHY we need to do it and HOW exactly to do it.

I hope my new book will be that voice for you.

No matter how sexy or appealing or flashy or tall, dark, and handsome the object of your desire may be…no matter how AMAZING the job opportunity may seem…no matter the size of your impossible dream…if it is NOT meant for you, it is time to let it go and move on to what IS. Just as Rose let go of Jack, so she could bloom instead of meet her doom.

“But MY Leonardo DiCaprio WANTS to be held,” you might argue.

THE SINGLE WOMAN SAYS: You don’t have to cling to what is truly meant for you. You can let go. It’ll stick around.

“But MY Leonardo needs me to cling to it. If I don’t, someone else will snatch it away!”

THE SINGLE WOMAN SAYS: No one can take what’s TRULY yours…so if they took it, it wasn’t yours. Something better is on its way!

“But MY Leonardo wants to be with me, he just doesn’t realize it. I just have to hang on and give him TIME to realize it!”

No, he realizes what you don’t: That it’s time to let go.

I say all this not to be harsh, but to be REAL…because you deserve the whole truth and not the faux truth. And here’s something else that’s REAL: You are FAR too fabulous to cling to someone or something that doesn’t fit you, doesn’t want you, or doesn’t belong to you. While you’re clinging to the WRONG thing, you’re letting the RIGHT thing slip right through your fingers!

So what does this actually look like, this “letting go and moving on” thing? What are the steps? What does it mean? And how do you know when it’s time to throw in the towel…call it a day…and walk away? In my new book, we cover the five major areas of life that we often find ourselves needing to let go of: Relationships, Friendships, Jobs, Opportunities, and Grievances. How are we going to do it? By examining the five benchmarks for letting go and moving on: the Who, the What, the Why, the When, and the How. At the end of each chapter, we review the Five Fabulous Finds from that section for you to take away as daily affirmations, p
ick-me-ups, or sassy reminders to get you off of “What Might Have Been” Highway and back on the road to letting go and moving on.

Read the rest of the book by clicking the image below. And don’t have a Kindle? No sweat! 🙂

To read the book on your computer, simply download the free Kindle for PC app here.

To read the book on your iPhone, download the free Kindle for iPhone app here.

To read the book on your iPad, download the free Kindle for iPad app here.

To read the book on your Droid, download the free Kindle for Droid app here. 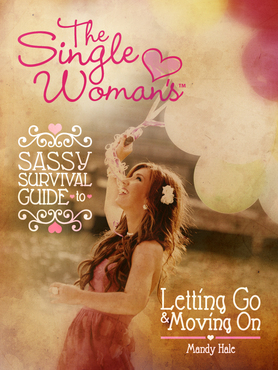